Quick Navigation show
1 V-Tech Boi Chest
1.1 The HUD
2 Maitreya’s Flat Chest Add-On
2.1 The HUD
3 Side by Side Comparison
4 Why Multiple Options Are A Good Thing
5 Credits

Prefer a feminine body and flat chest? You’re not alone! The V-Tech Boi Chest was created to fill this exact need, and has been a staple for many Second Life users for years now. Maitreya released their Flat Chest Add-on at The Itty Bitty Titty Committee event in September 2020. Both have a price point of L$499. This post is to go over each product and help you decide which is better for you. 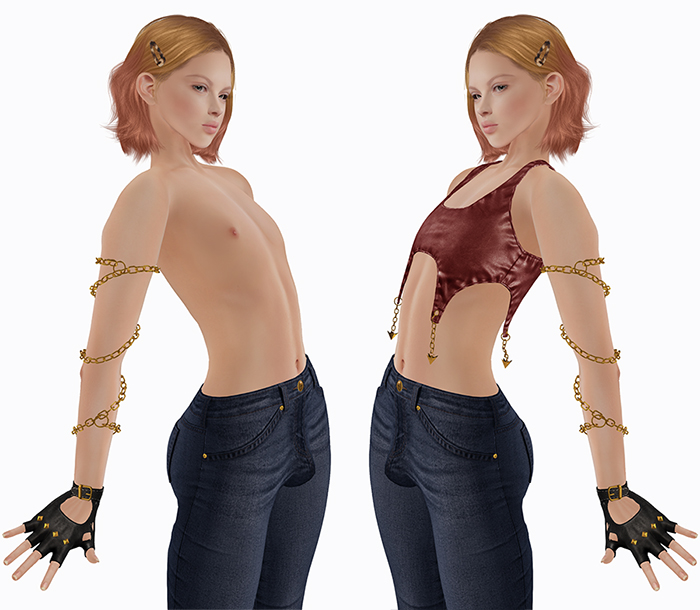 V-Tech created the main flat chest mod for Maitreya back in 2016. Since then it’s gained quite the following and has the support of multiple skin and clothing designers. Their products have been featured at various events and their customers absolutely love it.

There are two versions included with your purchase: the regular version to use with appliers and the BOM version. The applier version has tattoo, underwear, and clothing layers that match up with Maitreya’s body and can be controlled via the V-Tech HUD. It’s Omega compatible and can also be modified with your own custom textures. The BOM version uses the system layers, so it cannot be used with appliers.

Overall it’s really rather straightforward and easy to use. When you put it on it will automatically hide the sections of the Maitreya body required. If you use the applier one you’ll have to apply your skin after putting the chest on so it matches your body. Please note you’ll need the Omega version of appliers since Maitreya appliers won’t work on the V-Tech. If you’re using the BOM version just pop it on and it’ll adjust to your BOM skin right away.

This appears to have been a bug on my end of things. More info at the bottom of the post below the Credits section. 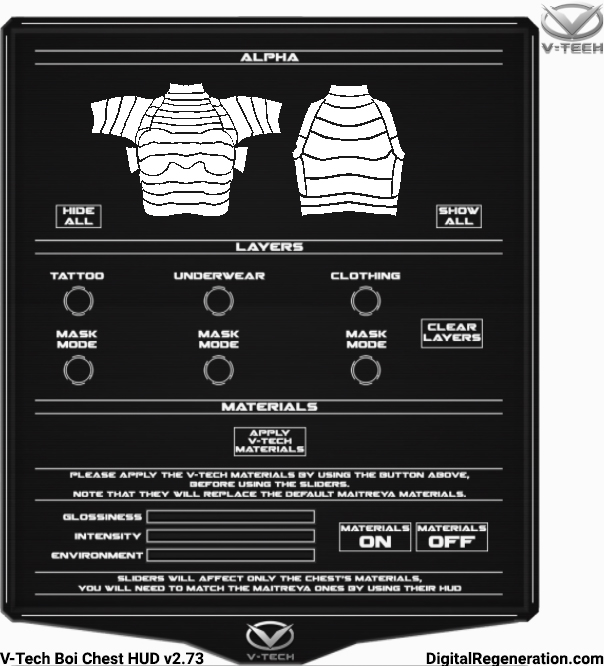 The first section is the alphas. You can see here how in depth they are and how many options you really have when hiding parts of your flat chest.

The second section is the layers. You’ll use this only for the applier version of the chest. You can toggle each layer on and off, mask each layer, and clear all layers with a simple click.

The materials section can be used for both the applier and BOM versions. You can toggle them on and off from here, and also adjust the Glossiness, Intensity, and environment via sliders. It’s important to note that once you adjust those sliders you’ll have to adjust your Maitreya sliders to match.

The HUD itself is minimized by clicking the sleek V-Tech logo on the top right. It keeps it unintrusive yet quick to access if needed. On Firestorm I love how it nestles right under the notifications row. It just feels and looks really clean. 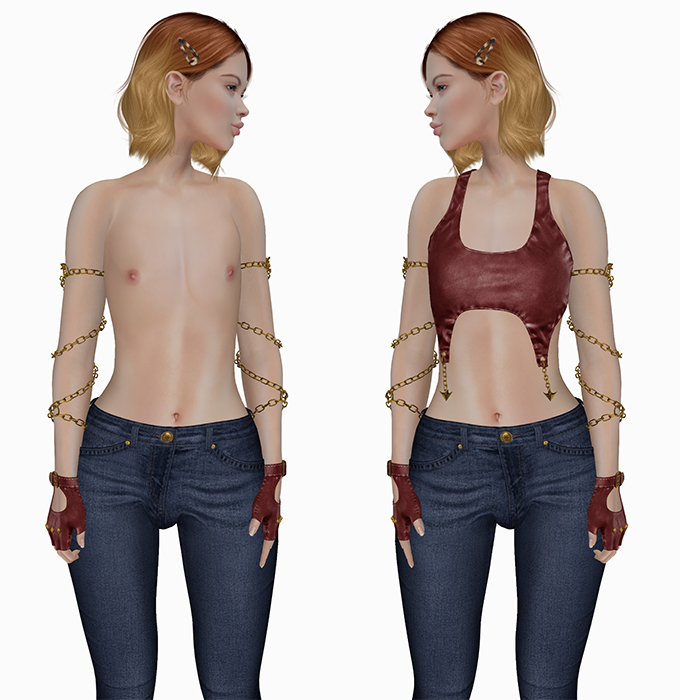 Maitreya is one of the most popular bodies in Second Life. They have a loyal fan base and tons of support from third party designers. This past summer Maitreya released their Petite Add-on which gave their users and easy way to use smaller breasts without deforming the chest shape. Many people speculated this was the first of multiple add-ons, and we’re now seeing the Flat Chest Add-ons debut.

The purchase comes with two flat chest options and one HUD that works with both (more on the HUD below). Lara Add-on Flat Chest is their standard version. Lara Add-on Flat Chest Adapted is a version designed to be “better compatible with flat chest content that has already been made prior to the Maitreya Lara Flat Chest release” according to the included notecard. Both chests come with their own underwear, tattoo, and clothing layers to replace the ones on your standard Maitreya body. Also included are BOM layers that match existing Maitreya skin tones (and the newly included Pink Fusion tones) and BOM layers for concealing the genitals on all the skins. The chests are both applier and BOM compatible just like the body is.

When you put the chest on it automatically hides the portions of your Maitreya body that need to be hidden. By default it displays the applier texture and with a simple click of the BOM button on the HUD it swaps over. As the chest is made by the same creator as the process is entirely seamless. 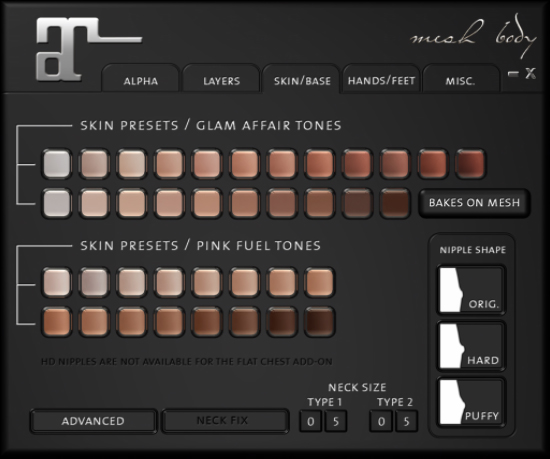 Speaking of that seamless feel, the included Flat Chest HUD replaces your default Maitreya HUD. It’s identical to the main body HUD in every single way aside from the Skin/Base tab, which is shown here. In place of the HD nipple options that the default HUD has, you’ll see Pink Fuel skin tones. In addition the nipple shape options show a flat chest instead of breasts. The nipple options are a nice touch, but the differences are very subtle. The original is flat, hard sticks the nipple out a tiny bit, and puffy bring a little bit of the areola up around the nipple itself. It’s a change for sure, but not as noticeable as on the default body.

There is one big oversight I believe worth mentioning. The Alpha section of the HUD is identical to the default body. This means your chest alphas hide in curved patterns similar to the breasts. It is impossible to alpha your chest in a straight line using the HUD. At first I thought this was a simple mistake, however a customer service representative for Maitreya confirmed that this is working as intended. I do want to mention the representative also suggested that BOM users could make their own system custom alpha layers as a workaround. Applier users cannot alpha in a straight line.

Side by Side Comparison

Here you can easily see the differences between the two chests. Things that are an obvious advantage for one side over the other are in bold.

Why Multiple Options Are A Good Thing

Regardless of which you prefer, this is likely to be a win win for flat chested users across the grid, and hopefully for both V-Tech and Maitreya. V-Tech not only makes the Boi Chest, but also flat chested clothing. They’ll hopefully see even more traffic as newly flat chested residents start looking for outfits. Maitreya will likely gain more customers simply by offering their own flat chest option as well. With even a small amount of luck we’ll start seeing even more designers making products for flat chested folks now that a majorly popular body has native support for them.

It’ll be interesting to see how quickly the Maitreya Flat Chest Add-on catches on, if fans of the V-Tech Boi Chest consider swapping, and if users who are introducted to flat chest via Maitreya’s release decide to purchase V-Tech’s instead. No matter what the future holds, both brands are supporting flat chested users and making them more visible which I think is a positive.

Do you have one of these chests? Are you considering getting one? Tell me what you think in the comments!

10/7/2020 – Post updated with where to find Maitreya Flat Chest now that the IBTC event is over. Also fixed a few typos and added sculpted nipple shape to the comparison graph (thanks Aleche Amat!).

9/9/2020 – After much testing on my end it appears that the stomach seam I was seeing with V-Tech’s Boi Chest was actually a graphical glitch on my side of things. As such I’ve updated the information and the photos in the post that were inaccurate. Sorry for any confusion this may have caused in the hour or so it was live before it was corrected!