To celebrate my favorite holiday, Halloween, I decided to create an avatar loosely based on the Norse goddess Hel. Those of you familiar with Hel know she’s described as being “part black and part white.” The video game Smite takes this literally by splitting Hel into two personalities and entities. I’ve based this look on that split image.

The hair is TRUTH‘s Ophelia. The hair itself is split colored, these images aren’t edited for that effect. You can choose any color in the HUD for either side. I highly recommend snagging the fatpack for this hair if you don’t usually. It gives you so many more options since you can wear two colors! The styling HUD also allows for the hair to sit differently as well. Ophelia is available at Salem until October 31.

Two skins are featured here, both by 7 Deadly s{K}ins. The darker skin is Pepper in Mud and the lighter is Key in Dew. Both are designed for LAQ bento heads and come in Omega appliers. Pepper is currently available as part of the Trick or Treat hunt as well as for direct purchase at the 7DS store. Key was available as part of The Black Fair this month.

Do you ever have the desire to dress up like somebody but don’t feel the need to look identical to them? That’s what the Inspired By series is all about! Feel free to use these short posts for a little inspiration of your own, whether it’s mix & matching some of the products used here or doing something completely new! While she’s gained a burst of popularity with the recent blockbuster film, Wonder Woman (aka Diana, Princess of Themyscira, Daughter of Hippolyta) has been around in comics since 1941. The look used in today’s post is based on her classic (pre 1960s) appearance.

Have you ever wanted to dress up like somebody but not completely copy their look? That’s what the Inspired By series is all about! Unlike our other series this one will be spread out over time with new looks coming as a surprise every now and again. Feel free to use these short posts for a little inspiration of your own, whether it’s mix & matching some of the products used here or doing something completely new! 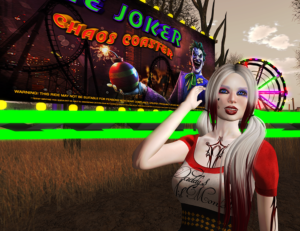 This well known character has been portrayed countless ways since her introduction in the early 1990s. Today’s look is based off of Margot Robbie’s portrayal in the film Suicide Squad.

These are the items used that make the avatar stand out as Harley even though she’s not a direct copy.

Any cookies that may not be particularly necessary for the website to function and is used specifically to collect user personal data via analytics, ads, other embedded contents are termed as non-necessary cookies. It is mandatory to procure user consent prior to running these cookies on your website.